Folks, when I met my wife for the time, it was not love at the first sight. Not for me. Not for Ana Sofia. We met four years ago in a Bahá’í gathering. We didn’t spend a lot of time together and probably I forgot her name soon after the gathering. But as time passed, we met at other gatherings and our friendship grew. And soon it was more than just friendship.

It’s funny how you keep good news secret instead to go out and tell everyone. When Ana Sofia and I decided to become girl friend and boy friend, we didn’t go public. We didn’t want to get the hopes up. What if it didn’t work out? And also we wanted to protect our relationship. If you have a new relationship and are not sure yet if it will last, the last thing you want to hear is other people talk about how they would love to be at your wedding or even worse joke about it. Once the relationship is strong enough, people can joke all they want. That’s why you want to keep it a secret at first. Even if you don’t tell anyone, it will not be for a long time a secret.

Back when we were in the “keep it a secret” phase, a common friend of us told me: “I think you should date Ana Sofia”. I said nonchalant: “Do you think we are a match?” She assured me we are. At the end I told her, I will think about dating Ana Sofia. And I did think about it. I came to the conclusion, I should give it a try. I mean, to continue giving it a try.

Now that it’s not a secret anymore, I have to admit to you my travel to Nicaragua was also to meet Ana Sofia’s family. 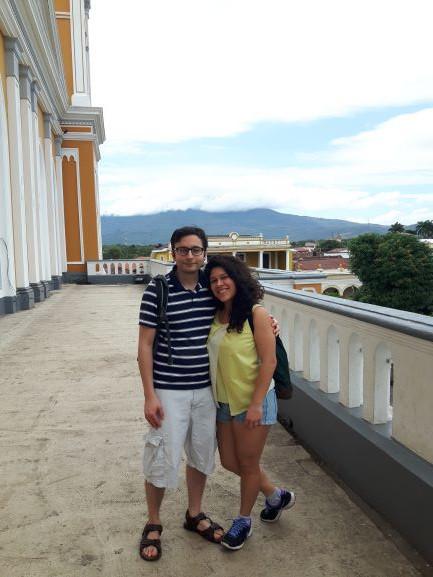 After Ana and I decided to get married and all the legal prerequisites were met, we organized our wedding to be very soon. We could now write a book with the title: “Plan a wedding in only four weeks”. It will be full of tips like “Plan your wedding in January: People have free schedules and can be invited on short notice”.

Ana Sofia and I had to make a lot of compromises to find a common ground for our wedding. For example Ana Sofia didn’t want to kiss in the public. I wanted our first kiss as married couple to be with tongue. We settled somewhere in the middle.

We watched an episode of a reality show about couples who plan an inexpensive wedding. There were a lot of stuff that we didn’t like. One think that we both liked was a wedding on a small remote tropical island. People on the island had the habit to help each other and when the couple was preparing their wedding they got help from everyone on the island. Ana Sofia and I feel lucky that our wedding was supported in different ways by so many friends. We are very grateful for all the help.

Since our wedding, we are in the process to settle together. We have stretches where we have quality time together. Other times, we barely see each other and I feel like William Sears, who remembers meeting his wife in the airport before they continue their travels – each one to another destination.

How I met my Wife